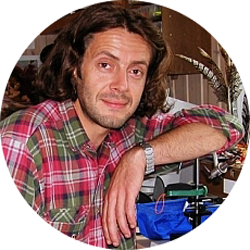 David was born in 1972 in Alsace, France. Fishing has always been a part of his life. He started with coarse fishing when he was 11 years old and it’s only when he moved to Norway in 1999 that he made his first cast with a fly rod and tied his first flies. Living by the Oslo fjord at that time, he was flyfishing mostly for sea trout, cod and pollock in winter time. And when the ice had melted his cast was for pike, salmon, brown trout, grayling, sea bass and mackerel. Then he moved in Cornwall, southwest of England, where he played with sea bass, pollock and mackerel for a year.
Now, he is back in France since 2010, living in the southwest of the country outside of Toulouse with Isabelle and their son Jules. He became member of the «Club Français des Pêcheurs à la Mouche» and now his flies are eaten (or try to be!) by brown trout, grayling, pike and a new fish for him… large mouth bass. He has tied his own fishing flies for all these species over the years but, what he likes the most is creating a fully dressed salmon fly or a fly that will be framed. He just loves playing with those beautiful feathers and materials for those complicated patterns. Over the years, he has been invited to tie flies at different shows around the world and he is very proud and look forward to be able to come and share his skills in Italy.