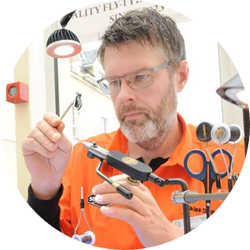 Niklas Dahlin has since his youth loved fishing, but he became a fisherman when he discovered fly fishing. His life as a fly fisherman started with tying flies; tried to fish with the fly for the first time in the summer of 2005, thought it was interesting but nothing more happened than that. During the Christmas holidays 2005 and 2006 he visited a fishing store and they had a beginners kit on sale, felt kind of bored at the moment and thought he could give it a go. Discovered that tying flies was a great recreation, tying flies made him calm and he found it to be a great way to empty heavy thoughts gathered at work. After a while he felt ready to give the more advanced tying a chance, found that he really loved the traditional patterns, especially the early American dry flies, the so called ‘Catskill style dry flies’. Another genre that has caught his attention is the English ‘North Country flies’, basically he just loves everything traditionally.
He once read an article that caught his interest, the headline was the flyfishers club of Londons mantra «There is more to fishing than catching fish»… Those words says it all. When he doesn’t tie flies he works with a fly fishing magazine in Sweden, «Flugfiske i Norden» («Flyfishing in Scandinavia»). Also he arranges every year a flyfishing only show in Uppsala Sweden.
Niklas tied flies at several fairs here in Sweden, also tied abroad, once at The International Tying symposium in Newark and several times at the British International Flyfair. At these events he met loads people who have inspired him, people like Dave Brandt, Mike Valla and a few who really have helped him out and that he nowadays calls his friends Ted Patlen and Joe Bonasera.