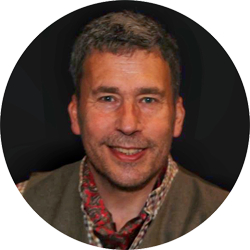 Stuart Hardy started tying flies at the age of 15 – then took a break of about 30 years or so. He has been tying salmon flies for a little over four years with a focus on freestyle flies with classic roots, and draws inspiration for his colour schemes from many years working on mountains and rivers in his early career as an Adventure Guide. What started as a passion for tying has now become an obsession with collecting, and he has amassed  one of the most significant early fly tying and hook collections in the UK, including GM Kelson's personal Fly Tying kit. His creations combine rare materials, with vintage or handmade hooks which he also manufactures – to compliment specific designs, and he is becoming well known among collectors for his 22ct gold ribbed bodies, and thought provoking interpretations. He will be tying at shows around the world in 2016 from Seattle to Germany, and the Czech Republic to Ireland to feed the enthusiasm of his followers. After a chance discovery of Hardy's Monoplane designs his artistic flies have evolved to be some of the most inspiring and provocative in the fly tying world. These otherworldly creatures have become his signature and he is very much looking forward to visit Italy and demonstrate this artistry at the show.